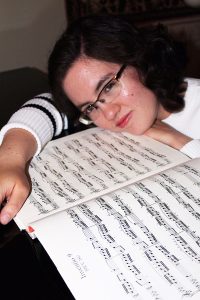 Marlena Muskens began piano lessons at six years old.  During her training, she competed in the Edmonton Kiwanis Music Festival, winning various awards and a music scholarship.  In 2008, she was a provincial finalist at the Canadian Music Competition.

In 2009, Marlena completed her Performer’s ARCT (Associate of the Royal Conservatory of Music in Toronto) in piano under the tutelage of Dr. Irina Konovalov.  Since then, she has performed six times with the Alberta Mozart Society in their annual Edmonton Mozart Festival.  This included her own concert (Marlena Muskens in Concert, 2014).  She became a member of the society in 2016.

In addition to her work with the Alberta Mozart Society, Marlena has built up a large résumé of accompaniment work.  She began accompanying in 2008 for her high school choir.  Then, upon discovering her passion for building collaborative musical relationships with other artists and supporting people in their musical needs, Marlena decided to turn accompaniment work into a business.  As a result, she has enjoyed many opportunities.  She has accompanied various music students for auditions, juries, and competitions.  She was also a volunteer pianist at Good Shepherd Parish for ten years, playing for masses, weddings, and funerals. Besides these, Marlena has played at many performances gigs; highlights include a guest performance at the Edmonton Chinese Philharmonica’s The Music Carries On (2011), a one-night cabaret show (Cadaveret, 2014) and Cathexis Theatre’s production of Murder Mime the Musical (revised) (2017).  She is currently working as a piano accompanist for Cathexis Theatre’s new musical, titled Wild Moo’s Chase.  This musical will premiere at The Edmonton Fringe Festival in Summer 2022.

Along with her Performer’s ARCT, Marlena holds a Library and Information Technology (LIT) diploma (MacEwan University, 2019) and a Bachelor of Science (B.Sc.) with an Ecology Specialization (University of Alberta, 2014).  She is currently studying information and records management at the Southern Alberta Institute of Technology (SAIT).  In July 2017, a research project that she contributed to during her B.Sc. was published in the Journal of Tree Physiology (Oxford University Press). This project, which was under the direction of Dr. Nadir Erbilgin (Department of Renewable Resources, University of Alberta) compared the monoterpene profiles of lodgepole and jack pine trees to better understand the chemical defenses of these tree species against mountain pine beetle invasion.